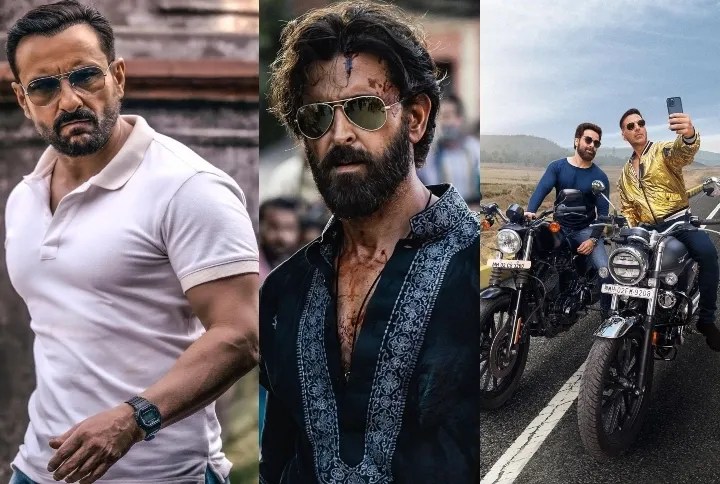 More the merrier – is an adage which is perhaps so true when it comes to cinema. We’ve seen multi-starrers and two-hero films do extremely well, since time immemorial. Be it Sholay, Andaaz Apna Apna or films like Gunday or War in recent times. Hence, there’s always excitement amongst the audience and people look forward to two-hero films. The good news is, this trend is catching on again and we have some really interesting films lined-up.

Let’s take a look at some upcoming two-hero films which have been announced and that we should completely look forward to!

Hrithik Roshan and Saif Ali Khan are set to team up for this Hindi remake of the 2017 Tamil film with the same name which starred R. Madhavan and Vijay Sethupathi in the lead roles. While these are really big shoes to fill, I’m sure Hrithik and Saif will live up to the expectations, and I can’t wait to see these two stars together on-screen. Their equation would be interesting to see as Vikram is a police officer and Vedha, a gangster. The first looks of the two actors have gotten immensely popular so I am looking forward to more!

Take a look at Hrithik’s post when he recently shared Saif’s look for the film.

The biggest action star of the country, who’s known for his martial arts and skills ever since he started his career is set to team up with the new action star on the block and the cinema fans couldn’t have asked for more. Akshay Kumar and Tiger Shroff are teaming up for Bade Miyan Chote Miyan and I cannot wait for action to get bigger, better and in double dose along with a touch of comedy.

This one again stars Akshay Kumar and has Emraan Hashmi with him. Emraan and AK are set to team up for Selfiee which is produced by Karan Johar and directed by Raj Mehta of Good Newwz fame. These two actors coming together is such an interesting combination and their announcement for the film with a unique video was so good. Totally cannot wait for this one.

Emraan Hashmi is also set to team up with Salman Khan in Tiger 3. While one still awaits the first look of the film or more details on this, just this news itself is pretty exciting, isn’t it? Recently, Katrina Kaif, Salman and Emraan were spotted at the airport returning from the shoot schedule of Tiger 3, and just looking at these pictures I can only imagine it would be so much fun to see these three actors on-screen together.

Shah Rukh Khan and John Abraham are set to be seen together in Pathan and all I can say is I’m super excited for this unique combination of actors. The film will also see Deepika Padukone reunite with SRK. While further details on this are awaited, I’m sure fans are excited and how!

Jr. NTR and Ram Charan will be seen in RRR and people are already loving the posters and promo of the film. These two south stars teaming up together in a SS Rajamouli biggie is not something the audience would want to miss out on. Ajay Devgn is of course an all together another USP which makes us look forward to the film, which also stars Alia Bhatt. While it would be fun to see Ram Charan and Jr. NTR together on-screen, the duo’s bromance off-screen is also worth noticing. Check that out in this post. RRR is set to release on March 25.

Such an interesting line-up of two-hero films, don’t you think? I’m sure all of you are equally excited for all these, as much as I am!