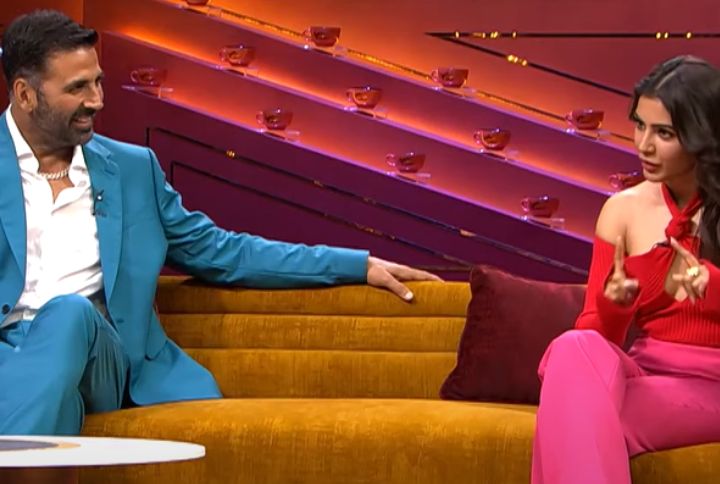 After watching the earlier seasons of Koffee With Karan, I can vouch that Season 7 has been the most honest and open. When it comes to the guests, it is really impossible for me to pick the best ones. All of them looked fabulous in their designer outfits. Here’s revisiting the best fashion moments from KWK. As soon as I saw the trailer of Akshay Kumar and Samantha Ruth Prabhu, I knew that I was about to be taken for a roller coaster ride. They were fabulous to watch on Disney Plus Hotstar. Both the stars not only gave witty answers but also made sure they scored high when it came to sense of humor. They even had their moment of roasting Karan Johar. The highlight of the show was the actor’s cool dance moves on the song Oo Antava in MyGlamm Slam Zone.

Here is the latest episode’s trailer:

The first episode featuring Alia Bhatt and Ranveer Singh made the show talk of the town. Here’s Alia Bhatt’s Newest Makeup Look in KWK Season 7 episode 1. After the witty and fun episode of Sara Ali Khan and Janhvi Kapoor, I wanted this episode to be more interesting and it turned out to be one. Frankly speaking there is not just one thing that got me hooked to the show. The Akshay-Samantha episode is undoubtedly one of the most enjoyable ones so far. Another memorable moment was how both the actors took a dig at Karan in their own style. Talking about Karan, the host also has been through a style transformation in KWK from previous seasons.

Read more about my favorite moments from the episode here:

My most favorite part of the fun filled episode was when both the actors shook a leg on ‘Oo Antava’ during the MyGlamm Slam Zone segment. The stars looked ravishing while performing the steps on the song. Both of them took the glamor quotient to another level. They succeeded in setting the stage on fire with their performance.

The funniest part of the show was when Akshay was not dropping his cards while answering the questions. His best and wittiest replies came during the rapid fire round where Khiladi Kumar answered all the questions in a sassy way.

It was not the first time when a celebrity from down South graced Koffee With Karan. Samanatha’s presence took the episode to another level. I adored the way she carried herself with dignity and courageously answered all the questions smartly. The best moment about her was when she described marriage to Karan in a humorous way.

Koffee With Karan Season 7 is brewing only stronger with every episode and it’s also giving us some of the best beauty moments. While this Koffee set-up looks so stunning, I can only imagine what amazingness is in store for us ahead. Stay tuned!