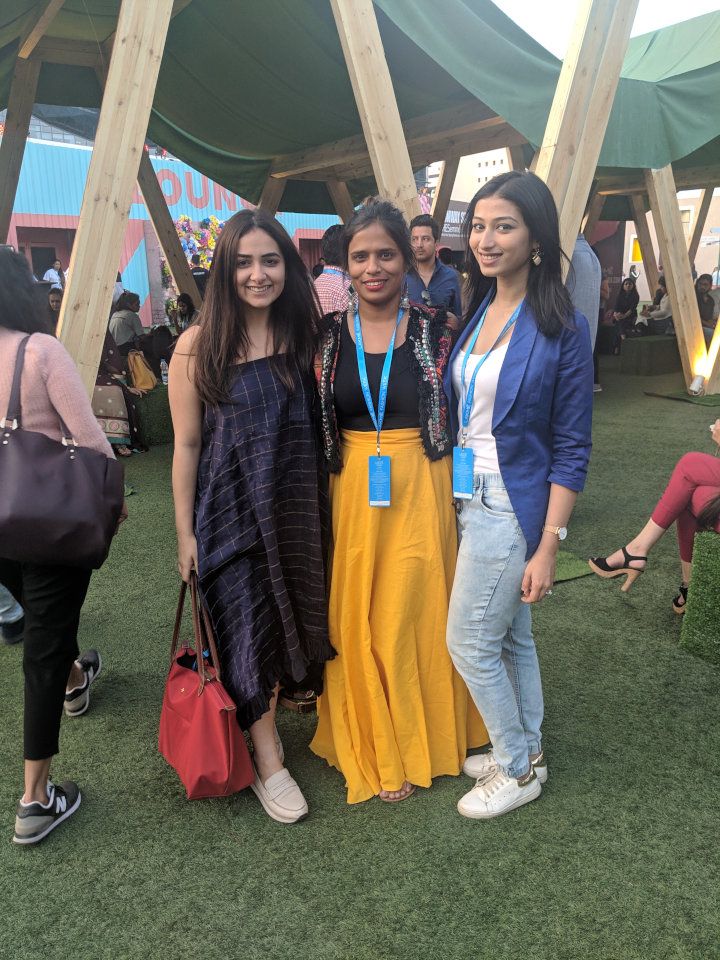 I’ve heard so much about Lakme Fashion Week all these years but I had never actually been to one. For those who have been living under a rock, Lakme Fashion Week is an event that is hosted twice a year to update the country on the latest trends and celebrate the talented designers who’re the tastemakers of our country. As a food blogger, you can probably understand how out of my element I was, but at the same time curiosity also got the best of me.  So, this year, I thought I’d cover a fashion event for a change. You can imagine how awkward it was for me, but I had to see for myself. Since I’m a food blogger by profession, all I’ve ever covered in terms of events are restaurant reviews, culinary meets, food festivals and restaurant launches and I needed to see what the fuss about fashion week was all about. Here’s presenting fashion week through a food blogger’s eyes!

The first few thoughts that ran in my head before I entered was—it can’t be THAT dramatic. Well, it was… And more! I entered to the sound of air-kisses. I don’t think I’ve ever seen so many people put this much effort into kissing another person while making sure their makeup doesn’t smudge. It really takes talent to manage both!

Step 2: The One Thing Besides Fashion You Defo Can’t Miss…

EVERYBODY. IS. POSING. No, literally. Once I entered, I just took a quick scan of the entire event. And to my eyes, it looked like a panoramic view of the crowd spontaneously bursting into a pose for a picture. I don’t think there was anyone who wasn’t posing. And don’t get me wrong, it’s evidently normal to pose at fashion week. But for a food blogger like me, it’s way beyond my understanding because the only time I pose for pictures is for my passport or while destroying a mammoth burger. And there was something about them. It wasn’t like a smile, even. It was more of an “I don’t see the camera. So, I’m looking far beyond the clouds, because I’m wearing a nice outfit” kinda look. Have you ever seen someone do this? At some point, I thought I’d give it a try. And THIS is how I looked doing it.

Harder than it looks, trust me!

Step 3: Play ‘I Spy’ To Spot The Many Gorgeous People

The most down-to-earth peeps at Fashion Week were the models. I had the opportunity to meet them all backstage. And contrary to our age-old misconception of the drama that goes on backstage, these guys were as breezy as breezy gets. Having said that, it blew my mind to watch these guys be on their feet constantly through the day. The only time they ever sat down, was for makeup. Their hustle is absolutely real, friends! And, the insane part is, they never let it show on their face. In fact, they fool around, laugh and have so much fun between all this chaos. Pssst! Let me let you in on a secret: models are real girls too!

Now, I know a socialite when I see one, but there were people sitting around, who nobody knew. I saw them on all days that I attended and I made sure I remember what they looked like so I could confirm that all they did was sit around and did nothing apart from the occasional selfie every once in a while. What were they all doing there and why did they come??? Eventually, I gave up. If you figure this out, make sure to let me know so I can get some sleep.

Step 5: Carry A Pair Of Sunglasses

If judgmental aunties at a wedding weren’t enough for you, head to fashion week. No matter what you wear, some of these people will give you a once over. They’ll basically scan you thoroughly with a clear expression on their face wondering how on earth you could have worn what you wore. I tried different looks on all the days, and all of them got some amount of shade. Man, tough crowd, indeed! So I just picked up a hack from my fashion friends, put on a pair of sunnies and thought to myself, “You can’t see me now!”.

Step 6: Prepare to be blown away by the fashion

I can’t talk about LFW without telling you about my experience at the shows, now can I? So, the days I attended LFW, I had to attend each and every show. These shows spanned from 12 pm to 10 pm every day. And the gap between each show was about 10 odd minutes after considering all the running around backstage and all. The one thing that kept me going after the first show was curiosity. I was awestruck with the versatility in designs, fabrics and creativity at all these shows. For real, every designer was so unique. I wanted to see who was next and what they’d bring to the table. In so many days, I’ve attended so many shows, that I think I can recognise a designer after looking at a particular design. Go on, ask me about them, I dare ya!

Step 7: Hydrate And Eat…You’re Going To Need It

Most people that attend fashion week, don’t come here for the food. They only eat to survive the day. So, as a food blogger, I couldn’t really relate to people strategically ordering things that wouldn’t spoil their lipstick or outfits in any way. People avoided spaghetti and opted for bite-sized food instead. We had an awesome spread of food. But sadly, somehow no time to really savour it ’cause duty called and we were off to the next show. I did try to take it all in and enjoy, but I wish I had more time. The one thing I OD’d on was coffee.

So, a part of my job for these few days at LFW was to spot attendees who were most stylish among the lot. And it was really interesting, TBH. Some of them were really really cool while the others, I just didn’t get. How on earth could this person pull this look off is all I could think about. This, for me, was what made me feel alien at the event. Just look at me, and you’ll understand how understated all my outfits were. I thought of comfort more than style, that, my friend, is what fashion means to me!

So, Would I Go Back?

100% YES! I wouldn’t miss this entertainment for the world. Firstly, can I just say? Hats off to the designers who up their game with every show. And secondly, the crowd that religiously shows up every season to, well, pose! I love the enthusiasm the industry shares and totally respect that. So, to sum it up, yup- I’d love to come back to check out good collections by talented designers and then to witness the dramatic crowd outside. If you haven’t yet been for it, I suggest you do! And let me know your views on this in the comments below, I’d love to know!