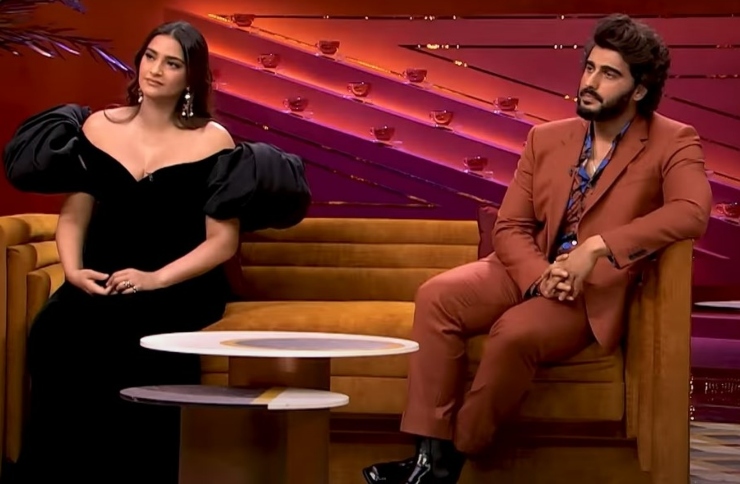 Week after week the guests on Koffee With Karan Season 7 are getting more candid about their personal life. Last week’s episode featuring Kareena Khappor Khan and Aamir Khan was thoroughly entertaining. And today, on the occasion of Raksha Bandhan it was time for sibling duo- Arjun Kapoor and Sonam Kapoor Ahuja to grace the show with their presence. Their promo had been making the right noises from the time it was released.

Sonam was looking glowing as the actress is in her final days of pregnancy. The actress had appeared several times, but her most memorable episode was with Deepika Padukone during KWK Season 3.On the other hand, Arjun has also made a couple of appearances on the show in the past.

Talking about some of the highlights, I feel the show belonged to Arjun’s honesty. The Ek Villain Returns star opened up about his personal life and relationship with Malaika Arora. He spoke about marriage not being on his mind as he wants to concentrate on his career. In a funny way he revealed how in school he got punched in the eye by a guy due to Sonam.

The second thing I liked about the show was Sonam’s innocence while remembering a film’s name. During the rapid fire round, she refers to Ranbir Kapoor’s upcoming film as Shiva No 1.

The most entertaining part was MyGlamm Slam Zone, where Arjun showcased his spontaneity with his answers. The best part on the show appears when both were required to call up a celebrity. Interestingly both called Varun Dhawan, but Varun chose to pick Sonam’s call over Arjun.

Now, I am waiting to see what’s in store in the next episode.