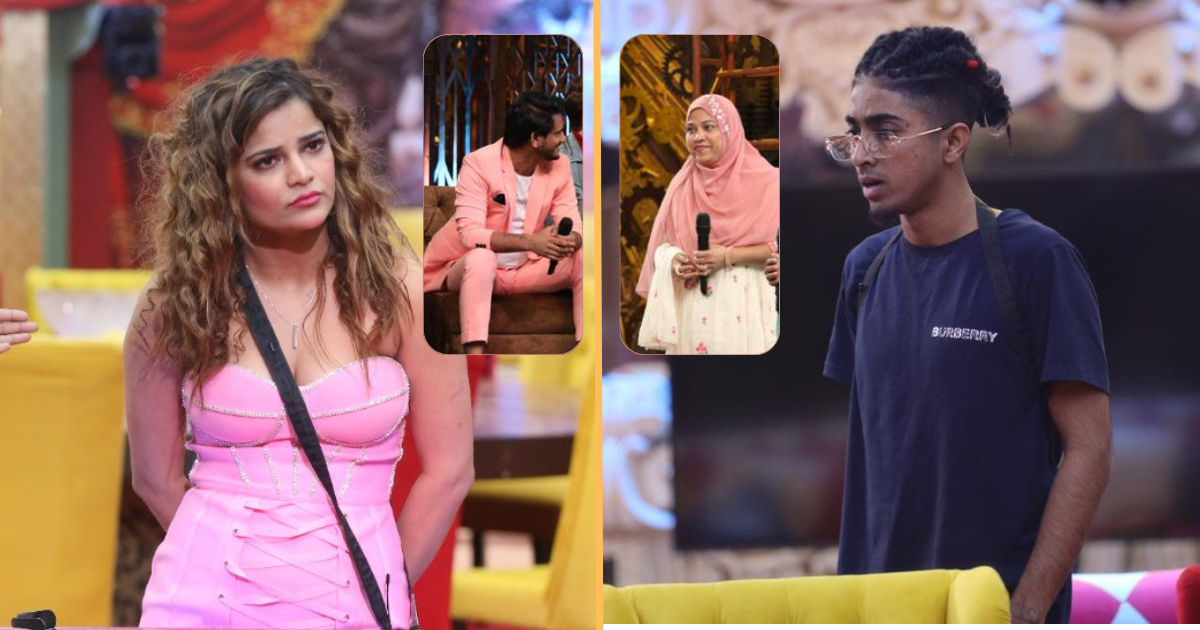 The Bigg Boss 16 house has seen contestants get into fights but, tonight it’s time for their parents to take over the stage with Salman Khan and it’s about to get more interesting seeing the families clash amongst each other in this “Shanivaar Ka Vaar”. To get an insight, read Bigg Boss 16 Day 98 promo here. Archana Gautam and MC Stan had a huge fight this week yet they were outside of Salman’s radar yesterday but, today Bhai is going to make sure that they’re not to be spared because of the foul language used by them. The night is just about to get more

When Salman asks who is the truest and the fakest in the house. The majority of the contestants call Archana true and Shalin fake. Between Tina, Archana, Soundarya and Archana all are safe there’s no elimination.

Tina’s mother believes that Stan’s language is not right. Nimrit’s father supports Stan saying that he always apologizes first. After this discussion, Salman reveals that the parents will be going into the house soon.

10:18 pm: Tina and Shalin’s parents talk about their chemistry

Salman questions Tina and Shalin’s parents that what they think about Tina and Shalin’s situation. Shalin’s mom believes that it’s okay to say I like you and all as a friend. Tina’s mom explains Tina’s nature and says that Shalin speaks behind Tina’s back always. Her mom believes that they should not be friends and even if they want to continue to be friends Tina should watch all the episodes and then decide.

The next question he throws that who is the mastermind and everyone responds with Sajid. Shalin’s mom clarifies over giving a statement on social media that she is scared of MC Stan, his mother justifies saying that she was not scared of Stan but of the trolling happening on social media.

Salman asks MC Stan’s mother how she feels about the fight between MC Stan and Archana. She says that Archana keeps on targeting the stand and bringing up his political background. But, Archana’s brother stands to defend her. On the other hand, Nimrit’s father had said to Bigg Boss 16 Team that all the followers who throw hate online at Nimrit are all purchased for trolling. Her father goes on to explain that those are paid. He also goes on to tag Priyanka as insecure.

Tina believes that Archana has got a lot of arrogance. Meanwhile, Archana cries in her bed and Soundarya tries to console her.

Sajid clears that he didn’t mean it in a bad way and Nimrit says that she took it sportingly. Priyanka expresses that she is upset with Sajid saying about her not smiling and her behaviour on the set. Sajid makes an opinion about Tina and Shalin saying that Tina will have to hold back against Shalin and she would have to be strong even if Shalin comes and tries to convince her.

Bhai goes on to expose Sajid’s words when he says that why doesn’t she smile at anyone and if she does this a director would throw her out of the set. Salman also reveals Sajid and MC Stan’s conversation over saving Sumbul because she makes good food.

Salman is about to say lines in which the contestants have badmouthed each other and the contestants have to guess who said it and the guilty housemate has to take a shot. First up is Soundarya and Salman say that someone had said something which he can’t say because it’s unethical for a woman’s image and Soundarya knows for a fact that Shalin must have said it. She gives Shalin a shot. Next Sreejita takes a shot and Tina is also given a shot over Priyanka’s words.

Salman reveals Sreejita’s words when she said that Tina has broken a lot of homes and that’s why she hasn’t been able to set up her own home. The next line is said by Shalin where he says that Tina goes bounced from his head.

Salman reveals that Archana said a bad word and then spread it in the house and Bigg Boss had to announce again and again to not say that word. Sreejita De clarifies that she didn’t know that it was a line from Stan’s rap. Bhai questions her what was the point of her falling into the fight and badmouthing her constantly. She tries to tell that she had no intention of getting into the fight and wasn’t aware of anything about the fight’s point. But, Bhai seems angry with her that even after Bigg Boss announced so many times she didn’t stop.

Salman comes on screen again and points out that what Archana said is considering the house as a set. He also warns her that if this is her attitude she can leave the house whenever she wants. Bhai clearly states that she is not frank but straight-up rude and if she continues to behave like this people will keep on targetting her. MC Stan apologizes for his mistakes and admits that it was his fault during the fight.

Archana believes that Salman only pointed it out at her and not MC Stan. But, Priyanka and Soundarya try to make her understand while Priyanka makes clear that she is taking it on her ego. Archana also declares that from now on she won’t consider this house as a house anymore and believe that she is on set. Nimrit Kaur Ahluwalia reveals to the mandali that Archana wanted to go on the stage during New Year while Stan’s concert was going on.

Bhai goes on to bring up the time when she had a fight with Vikkas Manaktala and Archana had made a whole issue over the burner. Salman also reveals that she told things about Priyanka like what would happen to Priyanka if she goes to her in-law’s house. He even tells Archana that she is in no place to complain about anyone.

9:20 pm: Archana believes she was right during her fight with MC Stan

Archana stands to her point saying that Shiv instigated her to say it in MC Stan’s face and that’s what she did. Salman takes a vote from the housemates asking them do Archana and MC Stan complete their house duties and everyone raises their hands for both. Salman believes that Archana loses her cool when she saw MC Stan’s fan. Then Salman comes to MC Stan’s words where he said indicated that Archana’s mother has an affair with Bigg Boss. Salman questions whatever he said was wrong and asked what he exactly meant but Stan clears it out by saying he was trying to think practically when Archana said that “Bigg Boss mera baap hai”.

Salman brings up the fight between MC Stan and Archana and goes on to the contestants whose fault was in the fight. In between of this he even points out Sumbul Toqueer sleeping and not listening to the alarm. As everyone takes Archana’s name saying that it’s her fault but, Soundarya Sharma tries to defend her so, Salman chooses to repeat Archana’s words. He points out that her words are not correct and the way she speaks. She’d even brought MC Stan’s fans into the fight which Salman feels that she is being jealous of his fans.

9:02 pm: Salman gets back to Tina and Shalin’s topic

Tina Datta admits that she is honestly confused about Shalin Bhanot. Salman makes sure he tells the housemates that he is just looking out for them. He even tells Priyanka Chahar Choudhary that she is heroine material. Shalin is missing as he is in the powder room, also he says that he believed that some playback was going on and Salman hadn’t come on screen yet. But, Bhai again doesn’t believe him because when Shiv Thakare went in he could hear Bhai’s voice.